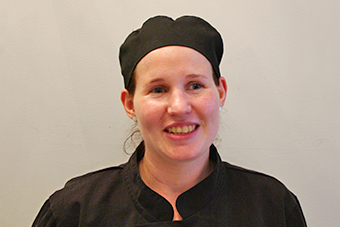 Emma started her work experience at a winery restaurant and small hotel in Central Otago New Zealand, before beginning a Modern Apprenticeship at the award winning Hermitage Hotel in Mt Cook New Zealand. Working with Executive Chef Franz Blum, Emma gained extensive experience in every facet of the kitchen.

After spending 3 years under the tutelage of Franz Blum, Emma decided to expand her horizons and relocate to Australia. She found her feet quickly and began an adventure that saw her take up a position at the idyllic 5 star luxury Ayers Rock Resort. Working in the many kitchens, such as Sails in the Desert Hotel and the boutique Longitude 131°, Emma gained valuable exposure in buffet and fine dining scenes. Highlights of her time in the outback include being part of award wining Sounds of Silence dining experience, a regular event of fine dining under the sparkling outback sky, and being given the opportunity to run the cafe outlet which served upwards of 500 meals a day.

Following 3 eye opening years working in such a remote location, Emma moved to Melbourne and began working at the sleek architectually designed Radii Restaurant at the Park Hyatt Hotel. In 2013 she was part of the team who gained industry recognition for their passionate work and were awarded the Deluxe Hotel Restaurant of the Year for Excellence.

At the end of 2013, Emma felt she was ready to take the next step in her career and took up the opportunity to become head chef at one of Melbourne's most popular city seafood restaurants, Box on Collins.